Extraordinary lives: portraits from a divided land. Photographs by Sophia Klaaste was held at the District Six Museum, Cape Town, March 19 – May 10, 2013 and was associated with the conference Land divided: land and South African society in 2013, in comparative perspective, (website) University of Cape Town, South Africa, 24–27 March 2013.

Klaase’s exhibition comprised 200 photographs from her collection. They were taken with simple disposable cameras, instamatics and latterly, digital cameras. One hundred and twenty of these images formed a frieze of ‘snap-shot’ sized prints - the same format in which they were originally intended to be viewed by Klaase and her subjects. These were arranged in a temporal sequence that allowed the viewer to follow the lives of Klaase’s sister, mother, friends, neighbours and herself over a 14 year period since 1999. Forty colour photographs were enlarged to A3 and hung in thematic groups. Her black and white images contrasted with those of her foster mother’s family album made in Paulshoek during the late 1930s, a comparison that revealed striking similarities in the social and cultural milieu of village life over the last 80 years as well as a comment on the global influences of media and youth culture that have penetrated this remote communal settlement. 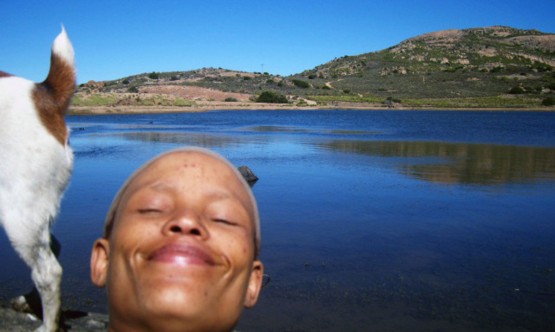 Sophia Klaase first used a camera when she participated in a photography project in 1999 as part of a long-term study in the village of Paulshoek, a remote village in Namaqualand, part of South Africa’s sparsely populated Northern Cape. At the time, she was only sixteen years old, and eagerly exploring the limited outlets for her feral imagination and vivacious nature.

Klaase has been making photographs ever since and today her collection consists of more than 1500 images. They record fourteen years of village life from the perspective of a young woman growing up in the ‘new’ South Africa, documenting family, friends, village events, daily chores and self-portraits that provide a poignant record of Sofia’s own passage into adulthood. Her images are often constructed tableau, posed and acted out as if the camera provided a stage for impromptu fantasies and playful inventions. It is evident that drugs and gang culture have found resonance with the youth of Paulshoek, and although HIV/AIDS has affected individuals in the village, it is rarely spoken of openly.
END_OF_DOCUMENT_TOKEN_TO_BE_REPLACED

Namaqualand is generally considered to be a peripheral part of South Africa. It is inhabited by a small, highly scattered rural population depending upon a few towns and mining centres for services and administrative facilities. Sophia Klaase’s home village of Paulshoek in Namaqualand’s communal area of Leliefontein originated as an outpost for livestock herders in the early 20th century and now consists of about one hundred households. It is reached by way of a rough gravel road, 52 kilometres from Garies, the closest town. Paulshoek lies on the isolated eastern edge of the Kamiesberg massif, adjacent to the vast commercial sheep farms of Bushmanland and the nuclear waste dump of Vaalputs. END_OF_DOCUMENT_TOKEN_TO_BE_REPLACED